Ideally, perfect positioning should work seamlessly both indoors and outside, where users would not even notice that the technology has changed between one space and another. It is possible to achieve such a positioning infrastructure through integration and smart background systems.

GPS is a great positioning system for the outdoors and its incorporation into various applications means that it is now an integral part of our everyday life. But when you go inside or into another space where the connection to satellites is lost, also the positioning data disappears.

Various positioning methods have been developed for interior spaces, for example WiFi is capable of room-specific positioning. However, most sensor- or radio-based methods that use signal travel time or direction in their positioning algorithms do not achieve very high accuracy. Bluetooth-based solutions can achieve an accuracy of 1-2 meters. The UWB radio technology-based solution developed by Iiwari Tracking Solutions is capable of a higher level of precision: under optimal conditions it can locate objects indoors with an accuracy of up to 10 cm.

All solutions that are based on radio technology share a common problem, namely that a base station infrastructure is required in the area where the positioning technology is used. We therefore share a common aim: to enable indoor positioning by building the necessary infrastructure at the lowest possible cost. Under these circumstances, cooperation and synergy in the integration of networks, solutions and devices are key.

For users, the ideal situation would be that the dot indicating their position on their mobile screen would not disappear as they move between interior and exterior spaces. To increase compatibility, different positioning systems should be linked to a similar coordinate system. GPS uses global coordinate system and it would be useful if all indoor positioning systems could also provide positioning data in GPS format if required, says Software Architect Janne Väre of Iiwari Tracking Solutions. Indoor maps, in other words floor plans, should also be determined in a standardised form. In this regard, Apple’s and OGC’s Indoor Mapping Data Format (IMDF) look very promising.

According to Väre, different positioning systems can operate independently and do not need to register each other. The systems would be connected by a separate background system, meaning that users could enjoy seamless positioning functions.

Iiwari is already in the process of developing such a UWB-based positioning back-end system for smartphones, which could be deployed soon.

This will become even more timely as the UWB chip and with it, accurate indoor positioning become more common in mobile phones, which have already become the most positioned objects. The advantage of mobile phones is that they already come with the necessary technology and to use positioning, only the relevant software would be needed. In other cases, positioning an object requires that a separate positioning tag be attached to it. Iiwari has already integrated Bluetooth into its own UWB tag, and GPS will also be easy to implement, Väre says.

Shared infrastructure for most telecommunications networks

In addition to creating an open background system and ensuring the ability to connect different positioning technologies to the same device, collaboration can be expanded even further. The construction of networks and base stations could create a bottleneck that may hinder the spread of radio technology-based indoor positioning. The problem would not be as great if infrastructure did not have to be created for each individual indoor location, as is currently the case, but if multiple positioning and communication networks, such as 5G, Bluetooth and UWB base stations, could be installed at the same time.

The best solution and plan for the future would be to design, create and integrate more networks already in the construction phase, for example in shopping malls or other large buildings, and later also in homes.

There are many benefits to creating a shared infrastructure.

Setting up different networks at the same time reduces installation costs, while also saving time. Also, as we learn to include more separate devices in the same container, there will be fewer cables and ‘boxes’, telecommunication base stations, in the positioning space, which will also improve the overall aesthetics of the location, Väre lists.

There are also other possibilities regarding integration. One interesting solution could be to utilise elements that are already needed in a space in the installation of base stations. At Iiwari, this has already been studied and tested, for example, by integrating base stations to lighting infrastructure.

Iiwari Tracking Solutions, a pioneer in indoor positioning, has its roots in the Technical Research Centre of Finland Ltd (VTT) and long-term UWB research. Iiwari innovates in cost-effective network solutions and products based on UWB technology aimed at increasingly accurate and reliable indoor positioning. 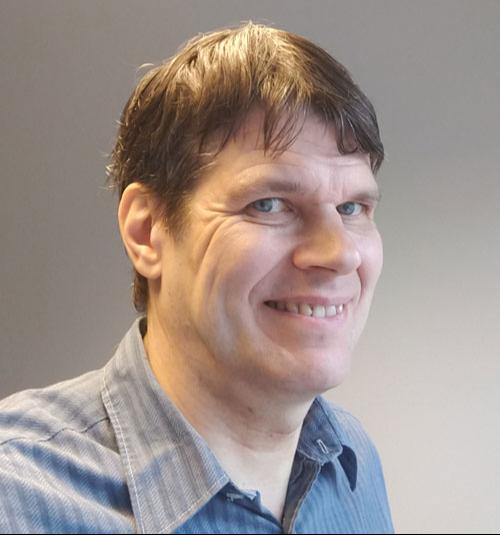 Janne has extensive experience in telecommunications technology research. He is a modest but ingenious ultra-wideband expert, protocol engineer and coder. Even more ingenious in the future.

in Our blog
# Future_of_business Smart_locationing Technology Trends
Positioning data adds concrete value to applications
User interface expert Teemu Lätti processes the raw positioning data into a usable form with the help of the applications he has developed.

We use cookies to provide you a better user experience.